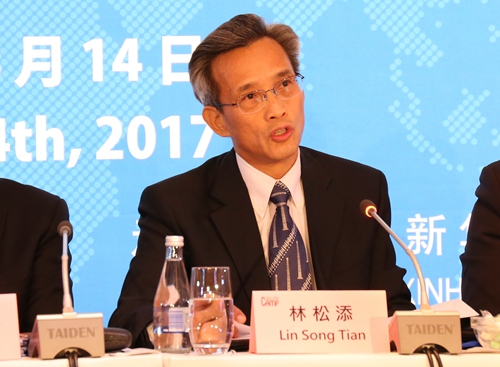 -Remarks by H.E. Ambassador-Designate Lin Songtian of the People’s Republic of China to South Africa at the China-Africa Media Forum

I’m very happy to participate in this China-Africa Media Forum. I wish to extend the warmest welcome to all the guests and friends from the media. I also wish to take this opportunity to share some of my thoughts on China-Africa cooperation in general, and our media cooperation in particular.

I have been serving China-African relations as my career. It was in 1999 when I first set foot on the African continent. Since 2003, I have served as the Ambassador first to Liberia, then to Malawi, and have visited 30 countries across Africa. Since June 2014, I have served as the Director-General for African Affairs in the Chinese Foreign Ministry and the Secretary-General of the Chinese Follow-up Committee of the Forum on China-Africa Cooperation (FOCAC). I am fully committed to promoting China-Africa friendship, and I’m deeply honored and proud to be able to participate in and promote the great cause of China-Africa win-win cooperation for common development. China and Africa have always shared a common destiny, and have enjoyed converging interest, equality, mutual trust, and mutual support. Throughout the times of national liberation, independence and development, we have been close friends and reliable partners. Today, we are very proud and happy to see that, China-Africa relations have taken a step further from our traditional friendship into a new stage with a dynamic growth. Today, China-Africa relations boasts a completely new landscape of comprehensive cooperation.

China has proposed new concepts for China-Africa cooperation. In March 2013, immediately after taking office, H.E. President Xi Jinping of China paid a visit to Africa, creating the precedent of making overseas trip first to Africa by the Chinese President after taking office. During the visit, President Xi proposed to adhere to the principles of sincerity, practical results, affinity and good faith and to uphold the values of friendship, justice and shared interests in conducting China’s relations with Africa, pointing out the direction for the development of China-Africa relations. The core meaning of these concepts is to closely combine China’s development with Africa’s pursuit of self-sustainable development so as to achieve win-win cooperation for common development. To realize this goal, both China and Africa have agreed to safely, orderly and effectively promote our friendly and mutually beneficial cooperation through the new concepts of common, intensive, green, secure and open development.

New breakthroughs have been made in China-Africa friendly and mutually beneficial cooperation. China always keeps to its faith and remains committed to efficiency and practicality in its cooperation with Africa. According to incomplete statistics, through joint efforts by China and African countries, lots of progress has been made in the implementation of outcomes since the FOCAC Johannesburg Summit. There are more than 600 projects in Africa that are either completed, or underway, or have been signed to be implemented. These projects together amount to over 108 billion US dollars. They could directly create 209,000 jobs, and could contribute 1.15 billion US dollars of tax revenue for African countries. We have completed a number of signature projects including the Addis Ababa–Djibouti Railway, the Nairobi-Mombasa Railway in Kenya, and the Abuja-Kaduna Rail in Nigeria. Rapid progress has been made in production capacity cooperation in Ethiopia, Kenya, Tanzania and the Republic of Congo as pilot and pioneering countries and a dozen of priority partners for production capacity cooperation. The construction of special economic zones and industrial parks in Ethiopia, Zambia, Uganda, Republic of Congo and Egypt has achieved encouraging results, which attracts more and more Chinese investors and creates a large number of jobs for local community. The Kaleta Hydropower Station in Guinea, a power-supplying project financed and built by Chinese side produces electricity for more than 4 million people in the capital and neighboring provinces of Guinea. And very soon, South Africa will become the first African country to export beef to China.

Today, we are very proud to say that China has become Africa’s largest trading partner, main investor and engineering contractor. In the first half of 2017, despite the economic headwinds, China-Africa trade volume soared to 85.3 billion US dollars with a growth rate of 19%. The Chinese non-financial direct investment in Africa grew by 22% to exceed 1.6 billion US dollars. China-Africa mutually beneficial cooperation has entered a new stage of transformation and upgrade, which is shifting from government-led assistance to market-driven trade and enterprise investment, from general merchandise trade to production capacity cooperation and processing trade, from project contracting to investment, construction and operation.

China-Africa cooperation for development faces new historic opportunities. China and Africa are both faced with a historic opportunity to synergize our respective development strategies. From 1978 to 2016, China’s GDP and per capita GDP increased from 216.8 billion US dollars and 227 dollars to 11 trillion dollars and 8,000 dollars respectively, marking a world development miracle by lifting over 700 million Chinese people out of poverty. By 2020, China will completely eliminate poverty across its 1.4 billion population. This is not only a political commitment made by the Chinese Communist Party and the Chinese Government, but also a great contribution to the mankind. Africa enjoys unique advantages of abundant natural and human resources, and great market potential, and is committed to the AU 2063 Agenda to accelerate its industrialization and agricultural modernization. And for China, we have the comparative development advantages in capital, technology, equipment, capable personnel, successful development experience and abundant advantageous production capacity. China and Africa need each other and enjoy great potential for cooperation. China has committed ourselves to supporting Africa in its efforts to address three major bottlenecks impeding development, namely, lack of quality infrastructure, professional and skilled personnel, and financial resources. China is committed to supporting Africa to develop self-sustainable systems of industrialization, food security, as well as public health and disease prevention and control. Most importantly, China aims to help Africa resolve three fundamental issues of jobs, food and health. We are fully confident that, by implementing the China-Africa Ten Cooperation Plans and the AU 2063 Agenda as well as China’s Belt and Road Initiative, we can deliver more tangible benefits to both of our peoples.

As much as China and Africa enjoy fruitful results and bright prospect of cooperation, it is also important that we realize the bottlenecks and problems that we have. For instance, the lack of mutual understanding and appreciation, and lack of market economy experience, particularly with promoting inflow of investment. There is also room for improvement in some African countries in terms of their laws and regulations, government policies, and public service. Among these problems, the most fundamental challenge is the lack of mutual understanding and an outdated conception or misconception of mutually beneficial cooperation between China and Africa. An important reason for this problem is that, so far, we have been getting information on each other mostly through western media. The stories that we have been told up there are invariably through colored-lens that are being purposefully pessimistic or deliberately smears China-Africa cooperation.

For the journalists from China and Africa, you have personally witnessed China-Africa cooperation. Over the years, the stories you have recorded and the stories you have told have played an irreplaceable role in the development of the friendship and cooperation between China and Africa, and these efforts will always be remembered profoundly. Under the new circumstances, our media people need to do more to adapt to the new situations in order to better serve China-Africa relations. This is a pressing task for all of us, and here I wish to make three proposals with regard to the roles that our media can play.

First, to promote China-Africa friendship, and uphold our common interest. As a community of shared destiny and common interests, China and Africa are faced with a common mission of development. We have always understood and supported each other on major issues concerning our core interests. Our media should fully leverage their strengths in telling true stories of China-Africa traditional friendship and mutually beneficial cooperation to help build up the positive energy for China-Africa ties. Efforts should be made to establish platforms and channels for Chinese and African people to learn more about each other directly, and to make our people realize that both China and Africa belong to the same developing world, and that we face the same task of reform, development and improvement of people’s livelihood. Our media should also give their due expression to the legitimate demands of the developing countries, and firmly defend our common interests. Our media should stand up and loudly to tell our people and the world who is our true friend and reliable development partner.

Second, to tell real and truthful stories of China-Africa cooperation, and offer guidance to the public opinion. Our media should make relentless efforts in capacity building, and work constantly to increase their voices among the global audience. China and Africa should deepen media exchanges, share best practices, encourage mutual learning and increase the number of journalists to visit each other. Only by working together can we boost the collective voice of the developing countries in the international community. In the face of vicious attacks and smearing from the western media, our media should not dance to their tunes, but come up with facts and figures in detail to refute the false claims. I’m confident that through our joint efforts, we can foster a new environment and narrative for China-Africa friendly and mutually beneficial cooperation.

Third, to identify opportunities of China-Africa cooperation, and promote our mutually beneficial cooperation. Our media should communicate strongly to the public the opportunities that we have in China-Africa development cooperation. That includes full, fair and objective knowledge of our mutual development demands, our respective strengths, and the historic opportunities they harbour. Our media should engage actively to call for implementation of the outcomes of the FOCAC Johannesburg Summit, and synergize Africa’s development with China’s Belt and Road Initiative, so as to create a more positive and favorable environment for deeper friendship and mutually beneficial cooperation between China and Africa

“CHINA AND AFRICA’S BROAD AND DEEPENING ENGAGEMENT: PROSPECTS AND CHALLENGES”