“FOCAC TEN COOPERATION PLANS, BELT AND ROAD INITIATIVE AND THE PROSPECT OF INDUSTRIALIZATION IN AFRICA” 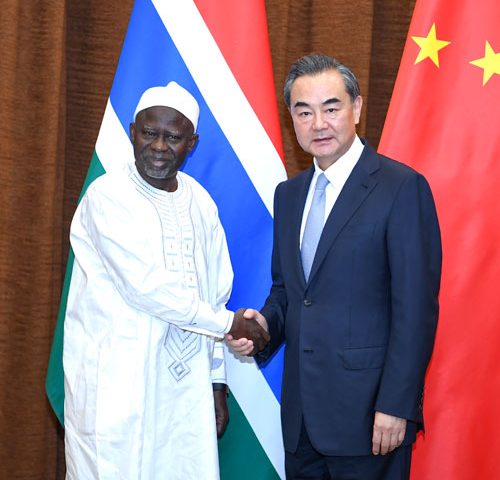 Wang Yi said that the resumption of diplomatic relations between China and Gambia in March, 2016 brought bilateral relations back to the right track and opened up broad prospects for mutually beneficial cooperation between both countries. China appreciates that the new Gambian government firmly adheres to the one-China policy and is actively committed to friendship with China. China is willing to work with the Gambian side to deepen political mutual trust, combine respective advantages, mainly enhance cooperation in such areas as infrastructure construction, agriculture and tourism, expand friendly exchanges between the two peoples as well as strengthen coordination and cooperation in international and regional affairs to push bilateral relations to a higher level.

Ousainou Darboe said that the Gambian government and people speak highly of the policy toward Africa proposed by President Xi Jinping and major cooperation measures put forward at the Johannesburg Summit of the Forum on China-Africa Cooperation, and sincerely thanked the genuine support and assistance China has provided for economic and social reconstruction of Gambia. The country will stick to the one-China policy, and looks forward to strengthening practical cooperation with China in various fields.

Both sides also exchanged views on international and regional issues of common concern.

After their talks, Wang Yi and Ousainou Darboe jointly signed an agreement on establishing a consultation mechanism between the two foreign ministries.