Director of CCS, Mr Charles Onunaiju delivering his keynote speech during the Colloquium on the 18th of October, 2017 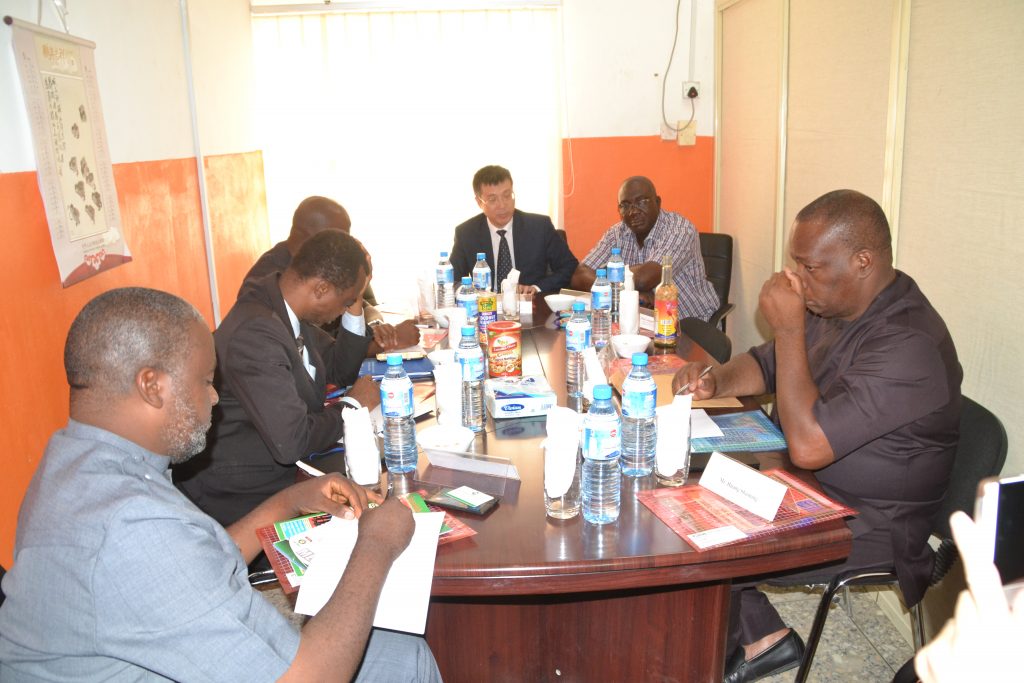 Despite that the Chinese delegation to the founding conference of United Nations in 1945 included Mr. Dong Biwu, a representative of the liberated area, the New China founded in 1949 was decided a seat to the global body to which it was a founding member and has fought tenaciously in the Eastern corridor while bearing enormous sacrifices to ward off and defeat Japanese fascist and militarist aggression in the second world war. The alarm bell of a free people in the East, ending several decades of colonial plunder and imperialist domination which the New China then, represented was obviously too much to bear for the western imperialist powers.

The United States of America deployed every trick in the book to obstruct the regain of China’s legitimate seat in the United Nations. Having managed to stall the question of China’s representation, America pulled yet another trick by making the 16th session of the UN General Assembly which have adopted the agenda item of the representation of China, when railroaded through a resolution to the effect the restoration of Chinese representation was an “important question,” requiring a two third majority vote for a decision. However “important question as prescribed in UN charter did not apply in the circumstance as it only relate to admission of new member, the suspension of the right and privileges of membership or the expulsion. The restoration of China’s legitimate seat to the U.N for which it was a founding member did not apply but the United States needed the game to maintain the phony representation of its proxy, the Chiang Ka-shek clique in the world body.

However, when at the 25th session of the UN General Assembly it became clear that more nations from Asia, Africa and Latin America wining the national independence and becoming members of the U.N, it downed on the U.S that it could no longer perpetuate its tricks to hold back on China’s regaining her lawful seat, it sponsored along with Japan a draft resolution on the so called “dual representation” which concede the rights of the people’s Republic of China to resume her lawful seat at the U.N but “at the same time provisions should be made that the Republic of China (Taiwan) is not deprived of it representation,” immediately the new machinations of the U>S was made known, China’s ministry of foreign affairs denounced the plot in the strongest terms, making clear that Beijing would never tolerate any situation of “Two Chinas” or “One China, One Taiwan” in the United Nations insisting that the restoration of China’s legitimate seat at UN and the expulsion of Chiang Kai-Shek clique is two sides of the same question. Finally on the 25th of October the 26th Session of U.N General Assembly voted down the draft resolution of the so called “important question,” bringing to an end the procedural obstacle, America has previously created to stall the question of China’s representation. Thereafter, a resolution tabled by Algeria, Albania and 21 other countries, which called for the restoration of all legitimate right of the People’s Republic of China in the United Nations and the expulsion of the representatives of the Chiang Kai-Shek from the UN and all the organs affiliated to it.

The famous resolution 2758 was adopted with overwhelming majority votes of 76 votes to 35, with 17 abstentions. The Assembly Hall was reported to have erupted in jubilant cheers at the restoration of China’s lawful seat to the UN. The U.S Representative acknowledged that “no one could escape the fact that the votes which have been cast do, in fact, represent the views of the majority of the U.N members.”

The representative of Burundi on behalf of the Africa members said that the restoration of China’s lawful seat in the United Nations appeared to be the down of a new international balance.”

Twenty six African countries then, were among the seventy six nations that vote the draft resolution to restore China’s legitimate seat at the UN, and in appreciation, Chairman Mao Zedong was reported to have said that “it was our African brothers that carried us back to the United Nations.” China’s epic journey to the United Nations is historically significant for the struggles along the way but even more significant for China’s endeavours in the U.N, since it was re-admitted, fifty years ago, China’s involvement in the U.N process re-enforced the centrality of multilateralism as a framework for inclusive and particular for inclusive and participatory international system, clearly demonstrating in practical terms the spirit and substance of the United Nations. Through the UN system, China have actively participated in the peace keeping operations, reinforcing the key pillar of the United Nations in ensuring collective security and peace. Beijing has done more than any other permanent member of the security councils in contributing peace keeping force to the UN peace-keeping operations across the world. The 76th session of the United Nations General Assembly last September President Xi Jinping in a statement to the world body not only remarked that it was the 50th anniversary of the restoration of the lawful seat of the People’s Republic of China to the United Nations, but pledged to “continue our active efforts to take China’s cooperation with the United Nations to a new level and make new and greater contributions to advancing the noble cause of the UN.” To bring practical expression to the United Nations spirit of international cooperation, China has initiated the Belt and Road framework, an outline of network of connectivity featuring infrastructure, facility, financial integration, people to people giving broader and more practical meaning  to international cooperation, beyond state actors to encompass peoples and civilizations. The Belt and Road framework of international cooperation has delivered solid and critical network of infrastructure connectivity between countries, regions and even within them, giving people important stake in the sustenance of the international system under common peace and collective security.

China’s foreign policy whose key fundamental has been and still is the five principles of peaceful coexistence, which include mutual respect for sovereignty and territorial integrity,  mutual non-aggression, non-interference in each other’s internal affairs equality and mutual benefit and peaceful co-existence is also at the center of the United Nations system. China reinforces the credibility and integrity of the United Nations by strict adherence and practice of its five principles of peaceful co-existence.

The consequences of the disaster of hegemonic and unilateral adventures outside the United Nations system and international law as seen recently in Afghanistan and previously in Libya, Iraq and Syria brings back the horrific image of “untold sorrows”, which the United Nations pledged in its founding charter to forestall and prevent.

China’s principled advocacy for a community of shared future for all mankind to be underwritten by common and inclusive development, collective security and universal peace summons global goodwill across political and ideological divide to safeguard and preserve mankind’s common home, the earth. The Chinese leader in his statement to U.N last September noted that “the world is once again at a historical crossroads,” but exhorted the world to “bolster confidence and jointly address global threats and challenges and work together to build a community with a shared future for mankind and a better world for all.” This clarion is at the very heart of the United Nations and its continued relevance, integrity and credibility will depend on how at sustain its original mission while engaging the reality of a rapidly changing world.

China and the United Nations: The epic journey

Despite that the Chinese delegation to the founding conference of United Nations in 1945 included Mr. Dong Biwu, a representative of the liberated area, the New […]
Do you like it?0
0 Read more