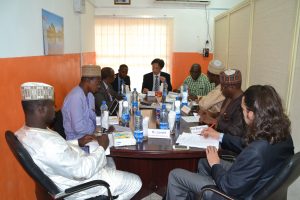 (Paper presented at the first dialogue session, organized by the Centre for China Studies (CCS) in Abuja, on the 5th of May, 2015.)

His Excellency, the Ambassador of the Peoples Republic of China to Nigeria,
Representative of Nigeria’s Ministry of Foreign Affairs,
Members of the esteemed panel,
Gentlemen of the press

Nigeria China bilateral co-operation is at a good and sound level of development and has enormous potential for further development, especially in the context of the political developments in both countries in between the past three years. In November 2012, the 18th National congress of the communist party of China elected Mr. XI Xinping, the General Secretary of the central committee of the party. In March 2013, the National Peoples Congress, the China’s supreme political organ elected XI Xinping the president of the country.

Nigeria’s 4th Republic inaugurated in 1999 under the framework of multiparty liberal democratic process has traversed for sixteen years, with a single dominant party, raising concerns about the health of its competitive process. On March, 28 of this year, the process reached for a phenomenal consolidation with the dramatic victory of the opposition, who presented a former Army Major General and head of state Muhammadu Buhari as its presidential candidate. As noted in the theme of this dialogue, the inauguration of General Buhari on the 29th May, would open a fresh window for invigorating Nigeria-China relation on the one hand and Sino-Africa Co-operation on the other.

The current stage of Nigeria – China bilateral co-operation with a trade volume already topping 16billion US dollars, has even greater prospects of expansion given the renowned potentials of the two sides. The dynamism and boundless energy of the two sides has yet to reach its peak under the existing co-operation and therefore would require deliberate and upward calibration of relevant policies and political commitments by the two governments to realize the huge prospects of bilateral co-operation.

In a letter of congratulatory message to General Buhari on his victory in the March 28 Presidential election, president XI Xinping expressed desire to deepen bilateral co-operation. Already this year is significant for Nigeria-China bilateral relation, because it marked the 10th anniversary of the establishment of “Strategic Partnership” between the two countries.

A key component of the strategic partnership is the establishment of consultative mechanism between the relevant organs and institutions of the state of the two sides to consult and co-ordinate position and views on crucial global and regional issues with a view to harmonize positions and possibly forge a common front or take similar stance in the best of their respective national interests. Ten years after the establishment of the strategic partnership and a window on mutual consultations, an objective assessment has not found more than a routine and traditional diplomatic engagement, with a gap still yawning for the value that strategic partnership should add to the existing co-operation.

General Buhari whose less than two year military rule between 1984 and 1985, is famous for uncommon energy, dynamism and activism, would have to seize on the mechanism of the strategic partnership and other relevant existing instrument to invigorate Nigeria-China Co-operation, add momentum to its current trajectory, ensure follow-up mechanisms and practical implementation of all mutually agreed undertakings. China and Nigeria shares the burdens of leadership and bears the global responsibilities of a big brother in their respective region. Both their populations, resource endowments and enormous potentials place both of them in clear pivotal roles in their respective regions and the world at large. The future and potentials of China-Africa co-operation which currently has notched a considerable global attention and interrogation would depend for success and further development on the strand of Nigeria-China bilateral relationship.

Abuja should get herself into the driving seat and give the Sino-Africa co-operation the momentum and constructive direction it deserve. In this respect, the Nigeria’s Ministry of Foreign Affairs must proactively guide the new administration to the clear road map, by bringing to its attention, existing instruments and mechanisms; it should traverse to bring Nigeria-China Co-operation to the strategic path of steady growth and development. In almost all the treatise and texts on China-Africa co-operation, there is nearly unanimity that the process of engagement is almost entirely driven by Beijing.

While this view is debatable, Africa and indeed Nigeria must not be perceived as lacking a vision or deficient in policy platform for mutual China-Africa engagement. While it is understandably a huge challenge to craft an Africa’s China policy given the sheer number of 54 sovereign states on the continent and their diverse interests and priorities, nonetheless effective co-ordination and consultation would have a framework of mutual understanding and develop an outreach mechanism through which Africa can give policy expression of her engagement with China.  Nigeria, South Africa and Egypt could play a pivotal role in such outreach mechanism.
In the numerous challenges of the incoming General Buhari’s regime, would be a quick and urgent response to the infrastructural decay, which has hampered investors. The sheer volume of capital investment in reviving the infrastructure is daunting and the constraint of financial flow to the sector is well known.

In the past two years, a new global financial architecture in which China is playing a pivotal role is in the making and has already taken shape. Nigeria, a key voice in the South struggle and demand for a New International Economic Order (NIEO), in the late 1970’s and 1980’s, has been conspicuously and pathetically missing. The Asian Infrastructure and Investment Bank (AIIB) proposed by Beijing in 2013 as participatory global financial platform to tackle the huge deficit of enabling infrastructure in the region is almost ready to open shop.

Inspite of Washington’s misgivings about the bank, the United Nations have characterized the AIIB as “Scaling up financing for sustainable development”. Beijing has also made clear that the bank would not weaken or even rival established financial institutions but would rather reinforce and more vigorously push forward the global economy.
China has upped its initial capitalization of the bank from 50billion USD to 100bilion USD. Fifty seven (57) countries have signed up to the membership of the bank, with South Africa and Egypt been the only African countries to join so far on the 14th and 15th of April, 2015. Inspite of Washington’s misgiving, her European allies and OECD partners have been joining the Beijing-led infrastructure bank. United Kingdom (UK) joined on the 28th of March, Germany on the 1st of April, Italy on the 2nd of April and Netherland joined on the 12th of April. The bank whose MOU has been signed on October 24th, 2014 has initially designated March 31st 2015 as deadline for membership application, but has announced that her doors are still open.

Nigeria should take advantage of the extension of the deadline to immediately seek membership of the bank. Though with initial focus on the Asia region, the bank would soon become a global destination of choice for infrastructure financing and with Nigeria current overwhelmingly challenge with infrastructural revitalization cannot afford to be missing to the financial opportunities of the Asian Infrastructure Investment Bank (AIIB). Besides the financial succor that can be accrued from its membership, Nigeria as a key regional player cannot be missing while the future global financial architecture is been designed. One of the enduring critique of the Bretton Woods financial institutions (World Bank and IMF) was that they came into being, when a considerable number of developing countries were under one form of European colonial tutelage or American imperialist hegemony and therefore a great number of developing countries did not participate in the founding instruments. And then the activities of these institutions become global and even pronounced in the developing nations, without their ownership.

The World Bank, formerly International Bank for Reconstruction and Development, was originally marked to finance the post-war reconstruction of Europe and once Europe was fully reconstructed, it would find other roles. It became a premium lender to many developing countries
The Asian Infrastructure and Investment Bank offers a glimpse to the newly emerging international financial architecture and Nigeria must as a matter of deliberate policy participate in the brick laying foundation of the evolving international economic order. South Africa, one third of Nigeria’s population ad even lesser in economic aggregate and potentials have consciously seized the opportunities of her strategic partnership with China to increase co-operation on key global issue and seemed determined to flow in the direction of the emerging re-alignment of forces and the global shift of power in favour of Beijing. Contemporary Nigeria’s foreign policy and diplomatic practice must align to the current global real politik.

The New Development Bank NDB launched last year in Brazil by the BRICS countries (Brazil, Russia, India, China and South Africa) is another watershed in the evolution of  a new global financial and economic architecture. The BRICS countries represent almost 3billion people or approximately 40% of world population and have a combined nominal GDP of 16.039 trillion USD, equivalent to the approximately 20% of the gross world output and estimated 4 trillion USD in combined foreign reserves. Brazilian president Ms Dilma Rouseff at the launch of the NDB last year said that the BRICS countries “ are among the largest in the world and cannot content themselves in the middle of the 21st century with any kind of dependency”. The bank to be based in China’s financial nerve centre, Shanghai would provide considerable financial liquidity to offset the enormous challenge of infrastructure developments in member states and beyond. How Nigeria could get her voice heard in these key and emerging, building blocks of the evolving global economic order is a challenge to the post May 29th administration of the President-elect, General Buhari.

On the other hand, the near impasse and the global concern for the Nigeria’s countdown to its presidential election on the 28th of March present both a challenge and opportunity to China’s traditional policy of non-interference especially in Africa. In her well known white paper titled “China’s Africa Policy published in 2006, Beijing among other issues in the paper proposed that “China and Africa will learn from and draw upon each other’s experience in governance and development, strengthen exchange and co-operation in education, science, culture and health. Supporting African countries efforts to enhance capacity building, China will work together with Africa in the exploration of the road to sustainable development”.

Actually, in the countdown to Nigeria’s important March 28th presidential election, the country came near to implosion with enormous implications to bring “governance to a halt. To nudge a country to governance according to her own rules, a pledge, Beijing undertook to share with her African partners would not amount to a breach of a long standing policy of non-interference. In my view, to undertake to clear the debris, when the house has collapsed is more insidious interference with no benefit to anyone.

In Africa, we say that when two brothers enter into a closet to talk and come out smiling, they did not probably tell each other, the truth. For the mutual benefit and development of the co-operation between Nigeria and China and by extension, Africa, Abuja, Beijing cannot be smiling all the time.