The Dialogue on the China’s initiated Silk Road project of international cooperation otherwise known as the “Belt and Road,” or  by its full name of the “Silk Road Economic Belt”  and the “21st Century Maritime Silk Road,”  organized by the Center for China Studies was held in Abuja last month, under the chairmanship of Nigeria,s former foreign minister, who was also the country,s former ambassador to China, Alhaji Aminu Bashir Wali.  The deputy ambassador of the Peoples Republic of China to Nigeria, Mr. Li Jing delivered goodwill remarks to the Round-table, outlining the prospects of enormous contributions, the Belt and Road Initiative can make to the existing robust bilateral cooperation between China and Nigeria in particular and Sino-Africa cooperation in general.
Seeking to foster global connectivity through massive overland, maritime and digital infrastructures across the globe, it attempts to revamp the spirit of the ancient silk roads through which commerce and culture flourished and ideas, crafts and peoples inter-mingled to generate one of history’s recorded outstanding civilizations. At the behest of the Chinese leadership, a reconstruction of the spirit of the ancient Silk Road in contemporary time to drive an inclusive global development and build a community of shared future for mankind is a major thrust of the Belt and Road initiative. As a strategy of connectivity across countries and within countries, the Belt and Road would spawn an elaborate network of land, rail and maritime transport arteries and industrial clusters along its now inclusive global routes.
The sprawling global public goods, whose driving philosophy is extensive consultations, joint contributions and shared benefits was the core subject of the Round-Table dialogue.
The dialogue which was chaired by former Nigeria’s Foreign Minister and former ambassador to the People’s Republic of China, Alhaji Aminu Wali was attended by representatives of the ministries of  Foreign Affairs, Budget and National Planning, Industry, Trade and Investment, Senior research fellows of foremost Nigerian Think Tanks – Nigerian Institute of International Affairs, (NIIA), Center for Strategic Research and studies (CSRS) of the National Defence College, University scholars, representatives of organized business sectors and large representation of media practitioners.

Despite some strategic lacuna in the Nigeria’s government, economic recovery blueprint, the Economic Recovery and Growth Plan (ERGP), participants at the Dialogue noted that it represents the boldest measure in Nigeria’s recent history to tackle the perennial issue of infrastructure deficit, and consequently observed that the Nigeria’s federal government economic blueprint aligns strategically to the core elements of the Belt and Road initiative. The dialogue participants, therefore, called on the federal government to lead the way in the underlying framework of “extensive consultation, joint contribution and shared benefits” of the initiative and further urged the federal government to set a high-level commission of experts and relevant government departments to examine and consult on how Nigeria can engage fully with the Belt and Road process and achieve optimum benefits in other to strengthen the national aggregates. More importantly, the dialogue observed that the Belt and Road international cooperation framework represents a significant shift in the international system and as a key regional power, with the largest concentration of black people in the world, Nigeria cannot stand aloof, while a tectonic but a less dramatic shift in the global balance of power is taking place. The dialogue, therefore, urged Nigeria to actively take part in the consultative mechanism of the Belt and Road framework, work within it, to leave her imprint in the emerging international economic, financial and political architecture, which the mechanism is both the institutional and structural expression. Nigeria, the dialogue noted, must be at the cutting edge of new and emerging trends in the international arena and in this connection, exhort the Nigeria’s Ministry of Foreign Affairs to liaise more closely with research Think Tanks, relevant scholarly communities with a view to engaging more proactively on the changing pattern of the international system.

The China’s initiated Belt and Road has already spawned the creation of a major international financial institution, the Asian Infrastructure and Investment Bank (AIIB) with solid capital base of one hundred billion U.S dollars to finance infrastructure and other related projects in Asia and other developing nations. Currently with a membership of nearly seventy countries across all the regions in the world, including advanced industrialized countries in the West like Germany, the U.K, Italy etc. the bank has currently only two Africans countries – South Africa and Egypt  but is open to membership from all countries in the world. The dialogue urges the Nigeria government to immediately enter into consultation and negotiation to accede to the membership of the AIIB, not only to access her huge liquidity but to ensure her influence on this  strategic framework of an emerging international financial architecture, after having been under colonial domination when last, a global financial system was established in the aftermath of the World War 11 in the 1940s, that brought to the existence of the twin Bretton Wood intuitions of the World Bank and International Monetary Fund, the IMF.

Nigeria and China bilateral cooperation broadly consultative and productive are currently at all-time high, though with profuse prospects to ever widen and deepen, can be engaged fruitfully to find Nigeria’s structural niche to the Belt and Road international cooperation mechanism and optimize the country’s exposure to the opportunities of the Initiative. But to find the appropriate policy framework to engage the process, Nigeria, the Dalogue noted, must refrain from knee-jerk approach, but initiate a sound approach of properly studied and thoroughly examined process that brings about meaningful contribution to the process and shared benefits to all participants, including Nigeria.

The dialogue on the Belt and Road initiative summarizes the mechanism as fresh opportunities to construct a new international system of a community of shared future for all mankind, calling on Africa, which has largely bore the brunt of unfair international system to engage actively in the process and deliver on the historic struggles of its people to bring about a democratic and inclusive international order, with emphasis that Nigeria must live up to her historic destiny to lead Africa in the new era. 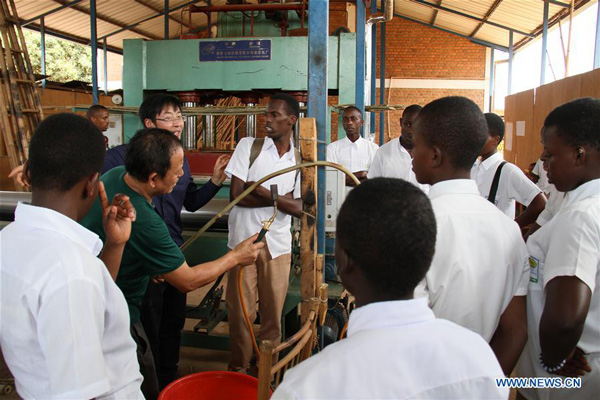