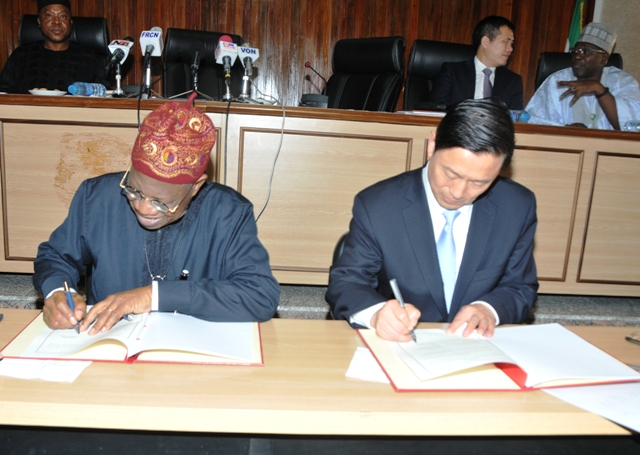 China and Nigeria in Abuja signed a Memorandum of Understanding (MoU) to enhance friendly cooperation in Media and Information Exchanges.

The MoU was signed between the Federal Ministry of Information and Culture of Nigeria and the State Council Information Office of China.

Minister of Information and Culture, Lai Mohammed who signed on behalf of Nigeria said the MoU was a very important milestone in diplomatic relations between Nigeria and China.

The minister said the MoU would also enhance friendly cooperation and interaction between government media agencies of the two countries.

He said it would facilitate news exchange, joint coverage, mutual visits including wider coverage of economic, cultural and social news and other events in the respective mass media.

In addition to the wide areas covered by the MoU, the minister requested capacity building cooperation programs for Resident Information Officers in his ministry and media practitioners in general.

Mohammed said his ministry was also interested in cooperation programs mutually beneficial in the area of animation and co-production of films which project the culture of both Nigeria and China.

The minister said the cooperation should extend to film distributions as well as collaboration between the National Films and Video Censors Board and the Chinese Censors Board to eradicate piracy and production of fake and adulterated films.

He called for partnership to address infrastructure deficit in Nigeria creative industry, particularly in the area of building community cinemas across the country.

The minister also called for strengthening of the existing MoU between the News Agency of Nigeria (NAN) and its Chinese counterpart.

He said the partnership would go a long way in addressing the problem of fake news.

The minister seized the opportunity to clarify that contrary to lies being peddled in the social media, the government “is working assiduously to redeem its electoral promises.”

Mohammed said he was optimistic that both countries would work to ensure a thorough implementation of the MoU for the benefit of their peoples.

Earlier, Guo Weimin, deputy director of the State Council Information Office of China said the signing of the MoU marked a new beginning in the relations between the two countries in the area of media and cultural relations.

He said staff training and program exchanges would further solidify the cultural ties between both nations.

Guo said his ministry would scale up the broadcast of news about Nigeria in China and appealed to the minister to reciprocate the gesture.

Guo acceded to Mohammed’s request for the training of the Resident Information Officers and said the Chinese Ambassador to Nigeria would fine-tune the capacity building engagement.

Guo was accompanied by the Chinese Ambassador to Nigeria, Zhou Pingjian to the signing of the MOU.