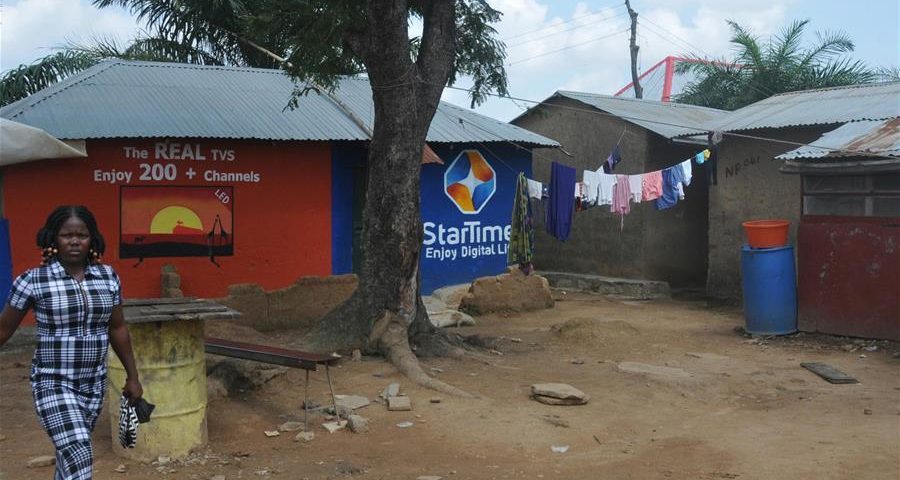 Hulumi, an undeveloped rustic community in the Nigerian capital of Abuja with limited infrastructure, came alive.

Its people, mostly of Gbagyi descent, with a few residents from other tribes, turned out en masses in jubilation to welcome their Chinese guests and their local partners who had come to launch a digital satellite TV in their locality to broadcast traditional music, dance and colorful display of their culture.

StarTimes, a Chinese firm which offers direct-to-home pay TV services, introduced its digital TV service to the locality as part of its pilot project to provide satellite TV in five Nigerian villages.

The project is a fruit of one of the resolutions of the 2015 summit of Forum On China-Africa Cooperation, in Johannesburg, South Africa, in which the Chinese government pledged to provide satellite TV in 10,000 African villages.

And so, locals in Hulumi thronged out in ecstasy when the innovative pilot project kicked off in their community with Chinese and Nigerian officials in attendance.

Dimas Hakimi, top chief of Hulumi district, reported that the Chinese satellite TV had brought everlasting joy to the people.

For decades, the residents had only been familiar with analog TV, thereby lacking the opportunity to watch some of the exciting satellite TV channels enjoyed by people in other towns and cities in the country.

With its simple-to-install decoders coupled with its low tariffs, StarTimes, in partnership with the Nigerian Television Authority (NTA), has brought digital TV within the reach of many Nigerians since 2010.

The satellite TV provides the opportunity for locals to watch digital TV programs of both local and international contents.

StarTimes offers some of its channels in three main Nigerian languages — Yoruba, Hausa and Igbo, as well as a Chinese Kungfu channel and Nollywood (Nigerian entertainment) channels, among others.

In Hulumi, the Chinese firm presented the community with sets of direct-to-home decoders for 20 households each, together with free installation of two sets of digital TV projector with solar panels as well as voluntary renovation works at the local primary school and donations of educational and recreational materials to the pupils.

Every evening, locals who had no television or lacked electricity supply gathered at the village square to watch their favorite channels on a large projection screen provided by StarTimes.

Hakimi, who welcomed News reporter to his home while watching the satellite TV together with his family, said he enjoyed watching, mostly, news channels. However, his wife and two sons’ favorite channels were those with entertainment contents.

“StarTimes has been greatly accepted here. We have never had this kind of experience. Most families in Hulumi are now enjoying a digital life, and this is marvelous in our eyes,” the village chief said.

“This satellite TV will be of great benefit to us. We have strong signals all around the local community,” he added.

According to official data, Hulumi and the six other surrounding villages have the population of 6,000 people.

Speaking at the well-attended ceremony to launch the satellite TV project on Thursday, Guo Weimin, deputy director of the State Council Information Office of China, said the goal of the Chinese government is to fulfill the pledge of providing digital TV service that has already been enjoyed by people in urban areas to more villages in rural areas in Africa.

Guo said China will continue to enhance its support for Nigeria and other African countries.

According to Yakubu Ibn Mohammed, director general of the NTA and chairman of StarTimes/NTA TV Enterprise, the Chinese firm has revolutionized the pay TV industry in Nigeria.

He said Nigerians, even those in rural areas, no longer need to spend a huge amount of money to enjoy good TV programs.

Noting that StarTimes has done so much to help with the digitization process of the Nigeria Broadcasting Corporation, he told the cheerful audience that StarTimes had brought an array of rich contents in educative, informative and entertainment channels and urged the locals to enjoy the service.

A thousand Nigerian villages are to benefit from this continental project. Guo Weimin, deputy director of the State Council Information Office of China, speaks at a ceremony to launch the satellite TV project in Hulumi community in the Nigerian capital of Abuja.