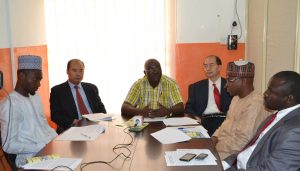 TEXT OF ADDRESS OF THE INAUGURAL PRESS CONFERENCE OF THE CENTRE FOR CHINA STUDIES (CCS) BY THE DIRECTOR, MR CHARLES ONUNAIJU ON THE 24TH MARCH 2015, AT THE CONFERENCE ROOM OF THE CENTRE IN ABUJA.

The Centre for China Studies, CCS is founded at an opportune moment when China-Africa Co-operation in general and Nigeria-China relation has made remarkable progress and is in great upswing. China’s rise and her global outreach is quite phenomenal. Her economic reforms instituted at the historic 3rd plenary session of the 11th central committee meeting of the communist party of China in December 1978 was the broad road map and framework under which China has navigated to the earth shaking modernization of her economy and achieved relative prosperity for her people. The path of deepening reforms and building inclusive political order under the framework of constructing socialism with Chinese characteristics has been the standard banner and rallying cry of all Chinese administrations and government since the early 1980’s.

Global intellectual outputs on the emergence of China, through great numbers of scholarly treaties and media coverage is considerably awesome and still multiplying and therefore our effort at the Centre for China Studies (CCS) would follow in the contemporary intellectual tradition of professional China watching. The strand of China-Africa Co-operation, a historic lever in Beijing’s global diplomatic outreach constitutes a considerable bulk in the scholarly interrogation and media coverage of China. As distinguished China Scholar, George T.Yu wrote in a foreword to a recent book on China and Africa by two American scholars, “China has established enduring relationships on all continents and with numerous partners both major and minor and with exception of Asia, no other continent can rival the extent, the intensity, the speed and the impact of China’s relations in Africa”.

Messers David Shinn and Joshua Eisenman, authors of the book in reference, reinforced this position and argued that “beyond its neighbour’s, perhaps nowhere has China’s political and economic relations with developing countries received more attention than in Africa. “Going forward, the two American Scholars, further posited, “this trend is set to continue as China’s expanding engagement will influence both the international system and the Continent’s prosperity and stability for decades to come”. And because our continent’s “prosperity and stability for decades to come” will be partly in a considerable way be influenced by China’s engagement with Africa, we at the Centre for China Studies will not be mere watchers of China with intellectual aloofulness but would actively participate in shaping, focusing and driving the process of the engagement to achieve mutually beneficial and win-win co-operation.

However, the Centre for China Studies is and will be eminently and independent think tank whose main article of transactions is and would remain ideas and knowledge stirred in the direction of adding value to the existing pool of knowledge through research and rigorous intellectual interrogation of all facets of China’s public life and engagements with Africa. We have assembled here for the purpose of this challenging enterprise, a cream of scholars from various fields but who are united by the intellectual hunger to apprehend China in all her ramifications and with special focus on Africa and China relationship. It is common refrain in contemporary times to speak or talk about China’s great economic success or even what some people have call “China’s economic miracle”. However, at the same time, as is the hallmark of Western Scholarship to ignore or even denigrate the key institutions and political process, whose accommodational, inclusive and consensual frameworks were at the root of the exemplary economic success and increasing prosperity of her people. At the CCS, we will meticulously engage all facets of China’s public life in research and scholarly interrogation.

In one instance, in which Africa has needlessly bleeded away, the ethnic strife that recently walloped Africa’s newest state, the South Sudan, China has achieved a considerable mileage in constructing a multi-national unitary state. We will follow closely with extensive research on how China’s management of ethnic nationality question and what in her experience can be useful in Africa where ethnic nationality question remains very explosive. We will traverse the full gamut of our mandate and objectives in building a result-oriented research centre, with clear vision to continuously add value to existing idea on China Africa Co-operation. We do not pretend to be policy actors in the domain of China-Africa relation, but through our research effort would provide resource that could help distill and refine policies for optimal engagement of the various key actors. To this end, we shall seek partnership and co-operations across board with similar and relevant industries of ideas across the world, especially in sister African countries and China, key policy centre’s like the Ministries of Foreign Affairs, Government think tanks and sundry institutions.

In the effort to establish the Centre for China Studies, we have received encouragement and support from the Chinese Government through her embassy here in Nigeria. We want to crave the opportunity provided by this meeting to extend our warm regards to the embassy and the Chinese government for the encouragement. May we also thank the Nigeria Federal government, who through its institutions, the Corporate Affairs Commission and the Ministry of Justice and Attorney General’s Office, we were given the Certificate of Incorporation. The media is part of the scholarly community which has devoted considerable effort in exploring China. The centre is ready to serve as your fact check and our modest library will be available for your background information. While, we will in due course publish scholarly journal for our research products, we will however continuously engage the media to disseminate our research activities to wider audience.

Therefore let me inform our friends and colleagues that our very first partnership is with the media, and also inform this distinguished audience that China-Africa Co-operation have great prospects. Since we opened our doors about three months ago we have been inundated by enquiries from people from different walks of life, who have physically visited our office requesting to be enrolled to study Chinese language, culture, history, politics, economics and even Chinese martial arts. We have however explained that we are a think tank exclusively devoted to research but from these interactions, we can infer that China-Africa Co-operation is already people driven and appear to have become a key social fabric in the everyday normal lives of the people. We will test this hypothetical observation through research in our centre in the times ahead.

Given our pioneering role in establishing a research centre devoted exclusively to China watching and Africa’s engagement with her, we have a broad vision to drive a fact-based research process, an inclusive scholarly platform for all views and shades of opinion. Our watch word would be continuous innovation of analytical tools to advance the study and understanding of the subject matter. We shall work to transcend the existing intellectual orthodoxy whose clear deficiencies in interrogating the key institutions of China are disguised in the ideologically motivated stereotypes of those institutions. As with her economy, China has also seen profound reforms of its legal system and political institutions. As the foremost institutional mechanism for driving the China-Africa relations, the Forum on China-Africa Co-operation (FOCAC) established in 2000 would receive an extensive research attention from the CCS.

Through the process of the FOCAC, China-Africa relations have seen regular and continuous interactions and have broadened the framework of contacts and consultations beyond the traditional state actors. With inbuilt follow-ups and assessment mechanisms, the FOCAC platform designed more as a process than an institution addresses itself to production of practical and tangible results. The unique structure of the FOCAC process in driving one of the world most outstanding regional co-operation would receive its due from our research activities. The most exciting thing about intellectual activity is that it is a permanent work in progress.

China, a great civilization that has made contributions to human society including the beautiful game of football, whose earliest form for which there is scientific evidence, was an exercise from a military manual dating back to the second and third centuries BC in China. According to the world football governing body (FIFA), the Han dynasty forebear of football was called Tsu’chu and it consisted of kicking a leather ball filed with feathers and hair through an opening, measuring only 30-40cm in width, into a small net fixed onto long bamboo canes. In contemporary times, China is in popular global consciousness and our centre is happy to join in the watch and observation of this enigmatic phenomena.

Thank you for listening.