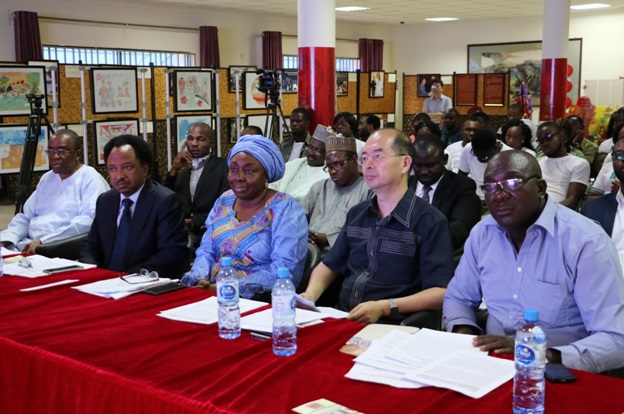 On the 30th of June, 2016 the Centre for China Studies, (CCS) in conjunction with the China Cultural Centre (CCC) Nigeria hosted a seminar to mark the 95th anniversary of the founding of the communist Party of China, (CPC)

The Peoples Republic of China has declared that it has “the firm political willingness and commitment” in supporting Nigeria to break through the triple bottleneck of infrastructure deficit, shortage of skilled manpower and inadequate funding, to overcome obstacles to sustainable and inclusive development.

The declaration was made by the charge de affairs of the embassy of the People’s Republic of China in Nigeria, Mr. Jian Qin at the seminar to mark the 95th anniversary of the founding of the Communist Party of China, (CPC) in Abuja, organized jointly by the Center for China Studies, (CCS) and the China Cultural Center in Nigeria (CCC). According to the envoy, “China has sufficient funding and mature technologies, a large number of strong industries and surplus production capacity” that is due for oversea transfer, and noted that in this connection, China and Nigeria has strong complementarities, huge potential and broad prospects.

Mr. Jian Qin further assured that at “present China is working closely and preferentially supporting Nigeria in breaking three bottlenecks that hamper Nigeria industrialization and agricultural modernization, noting that the Chinese side is pleased to see that since president Muhammadu Buhari took office, the government has been committed to economic development and improvement in Peoples life”

Earlier in his address, he has said that “since the establishment of the Communist Party of China (CPC) in 1921,it has grown from a small party with fifteen members into a large governing party which has a 67 years experience of governance and eighty million members, with its development history spanning three heroic phases of revolution, construction and reform.

Chairman of the occasion senator Shehu Sani and Barr. Ebere of Nigeria Women in Politics

According to the envoy, “under the leadership of the Communist party, China’s economic and social development has made brilliant achievements, political progress, enhanced social prosperity and brought happiness to the overall life’s of the people. With a gross national product of more than 10 trillion US dollars, China has become the world’s second largest economy, have basically solved the food problem of its 1.3 billion people, achieved unity of all her ethnic nationalities and currently leading all ethnic groups in China towards realizing the great rejuvenation of the Chinese nation.

Earlier, in his address, the chairman of the seminar, senator Shehu Sani, who is also the Senate committee deputy chairman on foreign affairs, called China a role model, who has not forgotten that it shared same trenches with Africa in the anti colonial struggle. He called China, reliable and trust worthy friend of Africa. Senator Sani who churned out several quotes from chairman Mao Zedong’s Red Book to the admiration of participants, urged youths to dig deep in their quest for knowledge, noting that early Chinese Communist leaders like Mao, Zhou Enlai, Deng Xiaoping were in their youths when they took action that reshaped China’s destiny for the better.

The director of the China cultural center and cultural attaché to the Chinese embassy in Nigeria, Mr. Yan Xiangdong, clarified on some issues raised especially by foreign commentators that the Communist Party does not have an ideology and also a claim that party organization is pragmatic and interested only in what works.

According to him, this view is wrong and even official statements make it very clear that the party does have a coherent world view”.

Mr Labaran Maku, former minister of information, making his remarks at the 95th anniversary seminar of the founding of the Communist Party of China, in Abuja.

Mr. Charles Onunaiju, director, Centre for China Studies, (CCS) in his own remarks said that “a distinct feature of the Chinese Communist Party was the appreciation of the Chinese specific social condition and political landscape and harnessing this key characteristics to the universal value of the scientific theory of Marxism Leninism “.

He added that” as in revolution, the party has brought this unique insight to bear on the construction of modern Chinese state and in the current stage of reform “.

Former minister of information Labaran Maku, who is also the national Secretary of the All Progressive Grand Alliance, APGA in his contribution noted that Chinese exponential development has been the cynosure of global attention and its current stage of reform, will be closely watched.